The Epping Civic Trust began in 1971 as a result of the proposed Parramatta Council Planning Scheme which would have seen large parts of Epping and Eastwood rezoned for medium density housing.

Strong resident action followed in the form of Public Meetings, petitions etc and at the 1971 Council Elections Colonel David Rouse and Mrs Anne Walker from the Trust were elected as Aldermen (now Councillors).

Due to their actions and continued resident pressure the scheme, as it affected Epping and Eastwood, was abolished in late 1973 except for the land bounded by Carlingford Road, Kent Street, Boronia Park and Coles Car Park.

Voting at Council Elections was still not compulsory and at those held in 1974 the Trust campaigning under the slogan ‘ACE Independent Team’ and won all 5 seats in the Dundas Ward of Parramatta City Council.

By 1977 voting at Council Elections had become compulsory and the ‘ACE Independent Team’ won 2 seats – Alderman Alan Hyam and Alderman Andrew Sneddon. Councillor Sneddon remained on Council until 1983 and Alderman Hyam until 1999 including several terms as Lord Mayor of Parramatta.

Over the years, the Trust has been active on many fronts including: 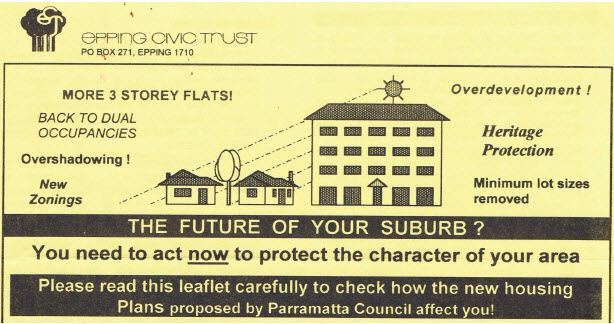