UPDATE - August 2019: Following a behind-closed-doors meeting between the Panel, council staff and developer, the planning panel assessment meeting was cancelled. We are awaiting news on what is happening next but it is believed the developer has a listing for the Land and Environment Court.

UPDATE - July 2019: This DA has now been listed again to come before the Sydney Central City Planning Panel on 7 August for determination. The Trust is awaiting the paperwork (only released 7 days before the meeting) but is planning to speak at the meeting as well.

UPDATE - 3 April: This DA was refused for a range of reasons by the Sydney Central City Planning Panel on 3 April. Council planners had recommended refusal largely due to the very unsatisfactory pedestrian accessway between Beecroft Rd and Rawson St (replacing Epping Walkway) that included stairs in the middle, and a very poor lift option.

UPDATE - 25 MARCH 2019: This DA is scheduled to come before the Sydney Central City Planning Panel on 3 April for determination. The plans have changed a bit since they were originally lodged (and story below written) as the proposed child care centre has been scrapped.

Council's report recommends that it is rejected. This is on a range of grounds (including height and density) but primarily centre on the poorly designed accessway (to replace Epping Walkway - but with steps, it is a very poor design) and access to the site via the council owned laneways. You can read the council report and see other paper work here.

The public can attend this meeting - either to observe, or can register to speak. See the link above.

The Epping Civic Trust will be lodging a request to speak at the panel meeting. Interestingly 46 submissions were received - a very high number.

Parramatta City Council received this DA on 21 Jan 2018 . You can read the details here.

It is over the present site of the Epping Walk between Rawson St, and Beecroft Rd. On the eastern side, it ends up near the foot of the stairway and the bridge over Beecroft Rd  which leads to the railway station; and on the western side, it ends up at Rawson St, more or less opposite the Epping Club. The Westpac Bank building and the newsagent on Rawson St will be demolished. The Epping Hotel, also rumoured for development will remain on the northern side, and the development will end at Hunts Lane on the southern side.

The community had been hoping that there would be a direct link through this building to the station entrance at concourse level, in effect replacing the unsightly metal bridge that is currently used to access the station. This building does not include such a link and would prevent one being built in future. The community believes this link should be infrastructure, paid for by Government, and not achieved by negotiation with developers, who will demand too high a price.

The link that will be provided to the public between Rawson St and Beecroft Rd in this development will have two flights of stairs to be negotiated. At present access is provided without stairs and under cover via the Epping Walk.

In addition, the Trust’s view is that in attempting to maximise the number of apartments it can cram onto the site, the developer has ignored a number of important planning controls such as floor space ratio, setbacks which define the width of footpaths and proximity to other buildings and maximum floor plate dimensions.

Other Trust concerns are 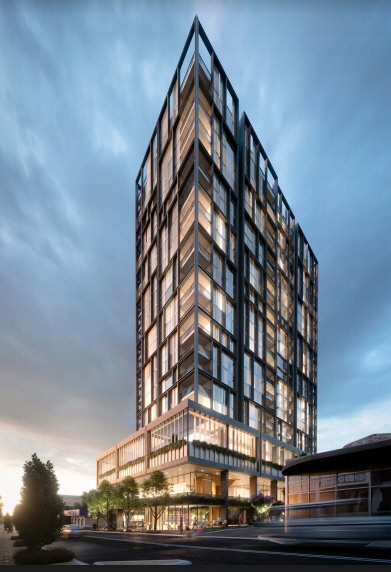