This DA for changes to proposed large unit development on Oxford St, Epping

This Application is for the installation of a 60 child childcare facility, a retail unit, and additional car parking spaces into a proposed 30 storey building which was approved “in concept” back in 2017/2018. (see DA/314/2017). It only forms a stage in the full planning process for this site - the final DA design for the units is not yet lodged, but it is clear from this application where the development is heading.

It replaces the last office/commercial building remaining in this part of Epping and is bordered by one completed high rise tower, and another approved (but not yet built) tower. Oxford Street has already changed beyond recognition with high rise developments.

The Trust has a number of objections to this application, and will be submitting them to Council by the due date of February 2. If you too object to these plans, you can register that objection as described in this link or by emailing a submission to council@cityofparramatta.nsw.gov.au

This Application extends the basement car park from four to six levels and from 299 to 317 cars. The additional spaces are advised as being for childcare centre staff, and for drop-off and pick up arrangements. Above the basement will also be 211 Apartments.

Oxford St is already busy with traffic. A childcare centre in this location can only exacerbate this situation as parents pick up and drop off children in peak hours. The site faces one side of Arden school where they have pull in coach parking, and is adjacent to the new Our Lady's Help of Christian Primary School about to be built facing Oxford Street. It is surrounded by numerous high rise developments that have already added at least 1,000 apartments close by.

The Trust also objects to the continual justifications of each of these DAs for more traffic/car movements on their individual numbers. All assessments should have to show and justify the cumulative traffic load on surrounding streets as that is the real impact on the neighbourhood.

The original Hornsby Council Development Control Plan for this part of Epping included the need for a number of through site pedestrian links between Oxford and Cambridge Streets. The better these links are, the more pedestrians can undertake local activity without using cars. One of these links was planned through this site.

The concept DA was approved without such a link, but could Council or the planning panel which approved the “concept” in 2017 have foreseen recent commercial and retail developments in Cambridge St? A through site link to Oxford St is clearly now needed. This matter should be reopened before it is too late.

Commercial and retail space proposed in this application is very limited, contributing further to the prospect of Epping becoming a dormitory suburb. The City of Parramatta council has attempted to address this issue retrospectively with changes to the required amount of commercial space in new developments but it is not evident in this DA.

The proximity of other high rise developments to this one, including the 29 storey Our Lady Help of Christians development, also calls into question whether such issues as privacy, overshadowing and wind effects, critical matters for a childcare facility to have been properly considered. The concept plans for the ground floor child care shows a dark, secluded outdoor space at the rear of the development. Is this really optimal for child care? Similarly, the concept open space/communal areas proposed for the units are shadowed areas at the rear (which look canyon like) or a windy space on the roof (next to the services).

We need your help to counter the worst aspects of this proposed new development. 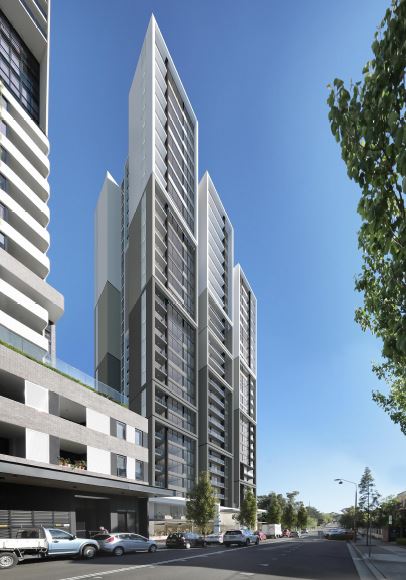 This DA is on exhibition for public comments until 2 February 2022.

The full paperwork for the DA can be found here. You will need to search for DA/1/2022 to pull up the paperwork.

Short submissions can be emailed to council@cityofparramatta.nsw.gov.au - include your name, address, email and the DA number - DA/1/2022.