This DA for a childcare centre opposite Epping Public School has been submitted for review following refusal by the Planning Panel.

The proposed development is for a new childcare centre on a residential site just down from Epping Public School. This post is in chronological order from the initial application (at the bottom) through to the most recent news.

September 2022 update:  The owner has now lodged a modification to the original DA (which was refused by the Planning Panel twice, but approved by the Land and Environment Court subsequently - see time line below).

This modification seeks to greatly enlarge the proposed childcare centre by:

Essentially, the Trust opposes this application for all the same reasons as we opposed the original DA:

This proposal is not satisfactory on many levels and we urge the Planning Panel to refuse it.

July 2019 update:  The developer has asked for a review of the refusal of this DA in April (see below). Details of his
application for review can be found in documents dated 2019 here:
eplanning.pa http rracity.nsw.gov.au/Pages/XC.Track/SearchApplication.aspx?id=517257

The Epping Civic Trust is very supportive of the development of new Childcare Centres, but believes they
should be of appropriate design and in suitable locations.

In our opinion, this development is inappropriate on both counts:
1. The area is prone to flooding and is next to a Council easement. We think it is concerning to build a facility for babies and infants in a flood prone area.
2. The development is a single building on a site which currently has two houses. It is of a size and scale which is not consistent with other homes in the area - the Epping Heritage Conservation Area.
3. Whilst the review application “spares” five trees that were to have been removed had the original application been approved, much vegetation, including sixteen trees, will still be removed.
4. We remain concerned at the additional traffic that this centre will generate on an already busy Norfolk Rd, opposite the Epping Primary School which is itself undergoing expansion, nearly doubling the student cohort in 2020. This site is very close to the junction with Pembroke Road, and already subject to delays.

In short, we believe this is a proposed development which is in the wrong place.

If you agree, we suggest you write to Council@cityofparramatta.nsw.gov.au , who seek submissions
as they consider this proposed development.

This DA came before the Local Planning Panel (for Parramatta Council) on 16th April for determination. This was the second time it had been listed, as it was deferred in March when the panel asked for a traffic study. On this occasion, the proposal was refused following a report by council planners citing a range of reasons for refusal. You can see the full refusal document here

Parramatta City Council received this DA and it was on exhibition in November 2018. You can read the details here.

The proposed development is for a new childcare centre on a residential site just down from Epping Public School. It would replace two residential properties currently on the site, which is next to a Heritage Conservation Area. The nearby housing is predominately single story residential. The proposed childcare includes the removal/partial removal of the houses and 21 trees, a two storey child care for 60 children and 13 staff, partially underground car parking for 15 vehicles (including under cutting into the site).

The Epping Civic Trust raised quite a number of issues with this proposal and you can read our submission here.

The council's report on the DA has recommended it is refused on quite a number of grounds (many in line with the Trust's submission) - you can see their report here.

The Trust was very surprised therefore that the proposal was not refused when it first came to the Panel, but they asked for a traffic survey that was already in the paperwork. The council report to the new meeting has not changed - they still recommend refusal. 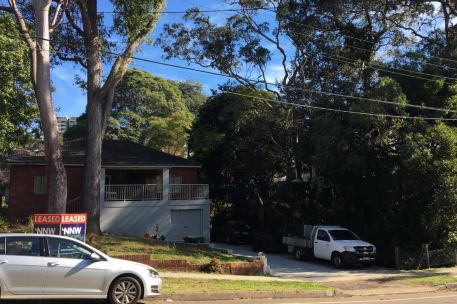 This DA is on exhibition for public comments until 10 October 2022. Short submissions can be emailed to council@cityofparramatta.nsw.gov.au - include your name, address, email and the DA number - DA/745/2018/A.